The Science: Why Adolescents Need Later School Start Times to Get Enough Sleep

Two main biological processes cause us to sleep:  (1) the circadian rhythm, which is a hard-wired “clock” in the brain that controls the production of the sleep-inducing hormone melatonin, and (2) pressure to sleep, which builds the longer that we are awake and dissipates as one sleeps.1, 2, 3, 3a

Around the time when adolescents go through puberty, both of these biological processes change.  First, teens’ circadian rhythm shifts later.  An adolescent’s body does not begin producing melatonin until around 11:00 p.m. and continues to produce melatonin until at least 8:00 a.m.  Second, the pressure to sleep accumulates more slowly during waking hours so that adolescents don’t feel sleepy until later at night.1, 3,24 Due to both neurological changes, teens’ natural sleep time shifts later by at least two hours to 11:00 p.m.4, 17, 24, 24a The sleep cycle reverts back to an earlier pattern in the early to mid-20s.17, 17a

This sleep-phase shift is a universal phenomenon of human development.  It affects teenagers around the world, regardless of parenting methods, technology use, or sleep hygiene; even adolescents in pre-industrial cultures without cell phones or computers develop the same sleep-cycle delay.5, 6, 7, 8, 8B, 9, 9A As humans evolved they tended to live in extended family groups, and the adolescent sleep phase shift ensured that there would be family members naturally alert to protect the group.17, 17A, 17B Scientists have observed this sleep shift in other types of mammals at puberty as well.10, 10A

Along with keeping later hours, adolescents also need more sleep as compared to adults.  Teens need 8 to 10 hours of sleep per night, and where an adolescent's minimum sleep requirement falls in this range is based on genetics, not personal convenience; the average sleep need is around 9 hours per night.1, 11, 12, 24, 25a This makes 7:30 a.m. the earliest time that teens should wake up in the morning.1, 11, 12, 24, 24A  And because teens’ bodies produce melatonin until at least 8:00 a.m., our adolescents are not primed for learning until after this time.24BIn fact, by waking up our adolescents prior to 7:30 a.m., we are taking away at least one full REM cycle each night (see illustration on the right “Cycle of Sleep in a Normal Teenager”), and this sleep stage is very important. Both physical repair and learning take place during sleep, and particularly during the REM phase of sleep - the brain consolidates and practices what the student learned during the day, forms long-term memories, and connects and prunes synapses in ways that improve daytime concentration, mathematical capacity, logical reasoning, complex thought, organization, and creativity.18, 19, 20, 21, 22, 23, 24, 24a, 24b, 25C

Other scientists, including researchers from Harvard and Oxford, have gone further and recommended that secondary school start at 10:00 a.m. or later.13, 14In fact, a recent study concluded that a start time closer to 11:00 a.m. would be more appropriate and that the "recommendation of starts no earlier than 8:30 a.m. for high school students takes a step in the right direction but does not go far enough."17 The author explained that the sleep shift is biological and cannot be changed; we must push back the timing of our young adults' school schedule instead:

“In adolescence and early adulthood optimal wake and sleep times are shifted 2-3 [hours] later in the day, and yet this group are still required to conform to education start times more appropriate to young children and older adults. Traditionally, institutions have tried to tailor the humans to the organization, but research suggests that, at least as far as time is concerned, it is more efficient, productive, and humane to align the organization’s schedules to the natural time patterns of the humans who study and work in them.”17

In Westport, high school begins at 7:25 a.m. and busses pick up students as early as 6:45 a.m.  This schedule is analogous to having adults leave home at 3:45 a.m. every weekday to start work at 4:25 a.m.1, 15, 16 Would you perform at your best in any capacity or be pleasant to live with under those circumstances?  Would you always be alert enough to drive safely or mentally healthy enough to make good decisions?

In short, our teens’ sleep needs and sleep cycles are fundamentally, biologically different from our own.  And while starting work at 7:25 a.m. seems reasonable for adults, it is not healthy for your high-school aged children.  Later school start times would reduce the mismatch between adolescents’ developmental biological drive toward later bedtimes and wake times and Westport’s current school schedule.

Westport Board of Education Meeting, May 8, 2017 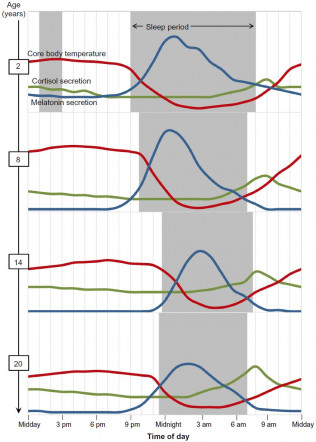 Illustration of Shift in Melatonin Secretion and Sleep Hours 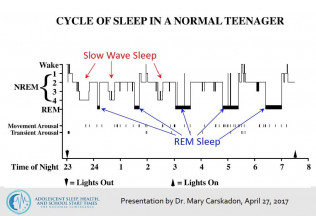 Video: TED Talk - Why School Should Start Later for Teens